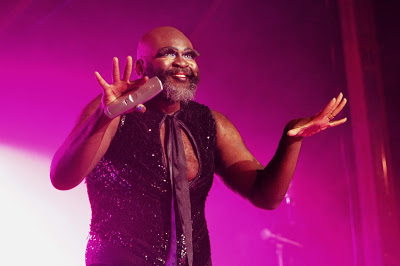 Le Gateau Chocolat’s Icons is a well-curated drag cabaret bringing together musicality, humour and also poignant story telling. From the setting of a teenage bedroom, the seasoned drag performer pays tribute to his musical idols (David Bowie, Abba, Whitney Houston and Bjork) while sharing stories from his life as a Nigerian-born gay man turned London-based drag performer. Classic and comedic drag antics, that had the audience in stitches, were juxtaposed with somber and heart felt song and contemporary political commentary. With the utmost theatricality, spectacle and also musical sensibility, La Gateau Chocolat’s well sequenced trip down memory lane ranged from a deep baritone rendition of Dolly Parton’s 9-5 to a classically camp disco version of I Would Do Anything For Love by Meatloaf.

I was drawn in first and foremost by the musicality of the show. Le Gateau Chocolat’s smooth baritone voice was rendered soft and vulnerable on several of the cleverly arranged pop songs. The show also relied heavily upon two live musicians – guitarist Marty Hailey and keyboardist Andy Jeffcoat who were positioned stage left and stage right respectively. While both were visible to the audience and were acknowledged throughout the performance, Hailey (who was the show’s musical director) deserves a special mention for his backing vocals and the roles he played in several songs throughout the performance.

Le Gateau Chocolat’s Icons is part of the 2019 Sydney Festival and is playing in the Magic Mirrors Spiegeltent from January 23-27.